Flying over Bloemfontein, the first thing you notice are the wide open stretches of land.  You also can’t miss how the drought has affected this region with virtually all of the land being a burned-out golden sandy hue.  Just a day earlier, a sandstorm blew through the city.

I arrived around 4:30pm on Friday, November 13.  While leaving the airport and making our way to Nick’s house we pass random patches of people walking along the street and sometimes in the street.  It almost appears as if they’re walking to nowhere.  Nick comments how much the city has changed over the years, sadly not for the better.  Bloemfontein, as with many of the surroundings areas seem to have come to a stand still.  They were developed to a point and then progress stopped.   Despite this, many parts of the city still have a welcoming simplicity.  Not bogged down by traffic or over-crowded restaurants and stores.  Just people living a simple life.

Nick’s father also lives in Bloemfontein in the same house where Nick was raised.  Like many families, they have a cat and a dog, but you’d probably be hard-pressed to find a family with a pet Blesbok.  Yes, the van der Leeks do have an almost fully grown Blesbok roaming around their living room.  But it’s not just any Blesbok – their furry friend likes to be fed from a bottle. 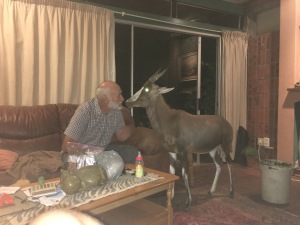 Later that night we had a steak dinner at Longhorn Steer.  A little tired from my travels but thankfully not jet-lagged.