John Carlin says Oscar Pistorius is likely to retreat into “despair.” Before we examine this statement from Carlin, let’s take a look at how Oscar appeared in court today as he applied for bail. 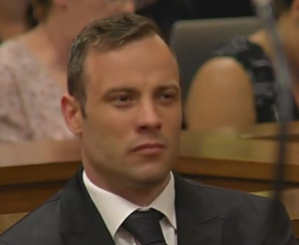 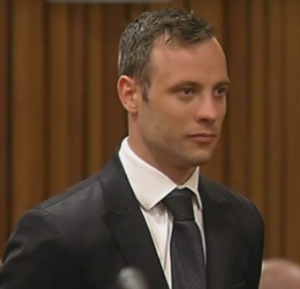 Is this the look of a man distraught with his current circumstances?  Or a man determined to muster the appropriate face at the appropriate time?  Although, smugness is most definitely not appropriate – ever – in court, that was the face Oscar chose to wear today.

What I can’t understand is why the State is not opposed to bail.  They did oppose some of the conditions, but they agreed not to challenge Oscar’s right to stay out on house arrest.  I’m not aware of any other countries where convicted murderers, not defendants, qualify for bail.  Anywhere else, they would immediately throw you in jail upon conviction and the convict will deal with appeals and hearings as necessary while incarcerated.

Not only does Oscar have bail, meaning he can continue to live at his Uncle’s mansion, he can leave the house (with monitoring & supervision) between 7am and noon up to a 20km radius.  I’ve seen some say this is freedom and others say it’s not.  While it’s not complete freedom, compared to a jail cell, in my view the luxury of enjoying sunshine for 5 hours a day is freedom.  It’s a luxury that’s been afforded to Oscar.  Why exactly does Oscar Pistorius deserve this luxury?  The simple answer is he doesn’t.  It’s just another “condition” that Oscar’s been able to weasle for himself using his high-powered legal team and influential family.

TO VIEW THE FULL BAIL AFFIDAVIT, CLICK LINK BELOW:

There were two things that bothered me most about Judge Ledwana during today’s hearing.  First, when Nel was arguing that they [the state] was prepared to provide the appropriate monitoring of Oscar, the Judge stated that would create unnecessary extra work.  Could the judicial system in South Africa be any lazier?  Yes, it’s work.  Monitoring criminals takes work.  Is it an appropriate argument to not provide monitoring because it involves “work”?  I don’t think so.

Second, Judge Ledwana equated denying Oscar the right to leave his Uncle’s house to “punishment”.  Yes!  That is what is supposed to happen when you are convicted of a crime, especially a violent crime, and especially murder.

Is this just more indifference to judicial affairs, is it corruption or a bribe, or is it yet another example of our insane political correctness and need for leniency in the world today?  What is it getting us?  More crime, more death, more dangerous people on the street.  Why?  So we can feel good about giving people second chances?  Murderers need to do time in jail.  It’s that simple.  It’s not vengeance or blind punishment; it’s justice.  That is what needs to happen to protect the public as well as maintain civility through the enforcement of our laws.

Last week was a great week for justice as Oscar was finally convicted of murder.  Nick and I were there to witness it and I’ll be writing about it in a separate post.  But lets not take a step backwards now and allow the Pistorius family, and a lazy, corrupt, justice system, undo the good of Justice Leach.  In order for real change to begin, we must remain vigilant that Oscar do his time.

For those of you who claim Oscar feels bad and can’t win whether he cries or appears confident while in public, let’s consider some of the statements he’s made and cut through the BS of this topic once and for all.

Yesterday, I came across an article that Pistorius buddy, John Carlin, wrote for the Sunday Times.  Here are some of the finer points Carlin shares with us:

“I was with Pistorius at a part in the home of his lawyer, Barry Roux, on the night of September 11, 2014, hours after Judge Thokozile Masipa had made it evident in court that the verdict of manslaughter was what he could expect and that she would formally deliver her sentence the next day.

He would then be going straight to prison, but at that party Pistorius wore the calm, satisfied look of a man who felt he had been vindicated by the justice system and believed his honour had been saved.  “I don’t give a shit about the sentence,” he told Roux.  “I am not a murderer.”

He knew he should expect a five-year sentence but appeared untroubled by the prospect as he chatted politely with guests and took turns to flip steaks and boerwors sausages on the barbecue.

It was a boozy party, but Pistorius did not drink alcohol and left early.  The last thing he told me before driving home was that for the first time in a long time – since he had shot and killed Steenkamp a year and a half earlier, on Valentine’s Day – he had found some peace.”

Oscar was calm and satisfied, and didn’t give a shit, because he and his family know that they [initially] dodged an enormous bullet.  Yes, pun intended.  But Oscar surely did give a shit as soon as he got to prison and realized how hard it would be.  No amount of favors, or ties with mobsters, could ease the discomfort and disgrace of wasting away in a cement box.  Yes, jail is horrible.  People should reconsider before they murder.

Carlin goes on to say:

“Pistorius, who will feel that the justice system and God have failed him, may be extracting some crumbs of comfort from the knowledge that he will never now be found guilty by a court of law of deliberately killing the woman he has always said he loved.

Yet, short of a shock confession by Pistorius, we will never know for sure whether he was telling the truth or not.

What one can be certain of is that right now, as he faces the imminent prospect of arrest prior to a new and lengthy sentence being passed in the new year, he is devastated.

We had just met for the first time and he sat across from me in his uncle’s study on a long leather sofa with his head resting on his aunt’s shoulder.  Pale and thin, a pitiful shadow of the “Bladerunner” who had triumphed in the London Olympic and Paralympic Games of 2012, he looked and sounded like a five-year-old boy whose puppy had just died.

Arnold Pistorius had read that in America, in cases where people had killed a person they loved and later regretted it, 20% ended up taking their own lives.  In his nephew he saw signs for alarm.”

Let’s come back down to reality – “The woman he said he loved.”  Saying you love someone, and actually loving them are two very different things, and I think we all know that actions are the proof.   Why should it matter to Oscar if the court attaches a name to the deceased – he killed Reeva Steenkamp, he knows he killed Reeva Steenkamp, so the rest is just semantics for him.  It’s a boo-hoo mentality of please don’t attach her name to this murder – yes, now we can call it murder, so let’s call it that.  But it’s not semantics for us.  I’ve said it many times and I’ll say it again.  Oscar should have been found guilty of Dolus Directus!

Oscar Pistorius should have been found guilty of killing

Now, for Carlin, or anybody, to say “we’ll never know” is the pinnacle of absurdity.  Of course we know.  We know from the evidence collected at this scene that Oscar lied.  That is a point that even the incompetent Masipa recognized.  No, we may not know every detail, but we know, as does Captain Mangena, that Oscar intentionally killed Reeva behind that door.   To say “we’ll never know” is merely a mischievous cop-out.

As for being a “pitiful shadow of the Bladerunner”, do you know what that really is?  That pitiful shadow is the real Oscar Pistorius slinking in the background never wanting to be seen.  Take away the limbs of steel, the upper body muscles and the flash of the camera bulbs, and you have a very small man on stumps.  But, the stumps aren’t what make him pathetic.  It’s that ridiculous comic book-like persona that makes him pathetically sad.

Oscar didn’t triumph at the London Olympics – he got there by being a spoiled brat who kicked and screamed for four years to cheat his way into the competition, at the expense of others.  And once he got there, he lost.  Not only did he lose, he was crying and carrying on behind the scenes threatening to leave after screwing others out of the opportunity to be there.  That’s not a fallen hero.  Get a grip, John Carlin.  And it wasn’t his puppy who died, it was a young woman with her entire life ahead of her, with family and friends who loved her, that he killed.

I would also much prefer that Arnold leave American statistics out of his rotten logic about Oscar being suicidal.  The optimal part of the statistic being “people that regretted it.” Do we sincerely believe that Oscar regrets when he tells friends like Kevin Lerena that he doesn’t need to justify anything to anyone because God knows the truth.  I suppose God also knows what was on the iPhone that his dutiful brother so kindly wiped and locked.

It’s no surprise that Oscar and Carl, and Aimee, all hide behind God.

Use that three letter word and it becomes a force field, just like Bladerunner was always Oscar’s cloak.  Nobody wants to go there; nobody wants to challenge their use of God.  Because all God-fearing people are surely honest and decent, isn’t that so?  In my view, there’s nothing more despicable than somebody using religion for personal gain.  It’s not about the belief itself [we’re all entitled to our personal beliefs] it’s more about hiding behind something or someone else because you’re too cowardly to take the responsibility on your own.

So now Oscar will pay his $688 and we’ll wait four months to see if Oscar sticks or around or heads to some other exotic parts, perhaps Botswana where his family owns land.

We’ll watch and wait to see what happens with his appeal to the Constitutional Court.

One thing is certain, the Oscar show is not over; far from it.  It will never be over as long as deceit, money and entitlement are regarded as more important than the truth.  It’s up to us to remain vigilant if there’s any chance for greater peace in this world.  I’ve often heard it said many times – why Reeva?  why Oscar?  We say, why not them.  Every victim and every criminal is indicative of the other.  We have to start somewhere and right now this case holds the power for change in very real ways.  It’s imperative for South Africa, for women and the rest of the world, that Oscar gets his due process, and that the result of that process is the conviction of murder being upheld, and Oscar serving the appropriate full sentence. 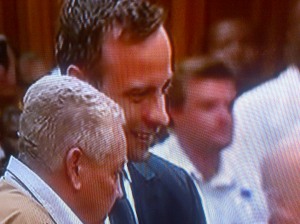 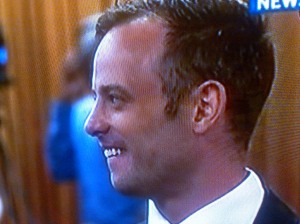 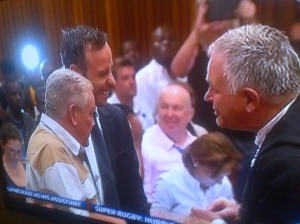 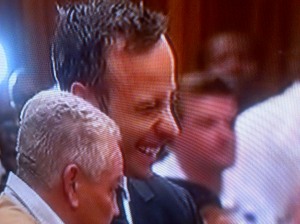 84 Replies to “Carlin calls it despair, I call it deceit”