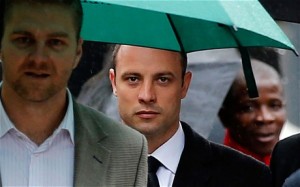 Dr. Johan Stipp is back on the stand. Roux is cross-examining. He is trying to nail down how quickly Dr. Stipp got out of bed after he was awoken and then heard screams. Dr. Stipp states that it was just moments (seconds). He testifies to hearing approximately 3 screams. He looked at the house to the right of Oscar’s and all of the lights were on. He looked at Oscar’s house and just the bathroom light was on. At the same time he is trying to ascertain where exactly the screams are coming from. Roux is trying very hard to nail him down on exactly which of these things came first – the screaming, or the looking at the lights, talking to his wife, etc. Dr. Stipp is trying to explain back to him that all of these things are happening at the same time. Roux desperately needs there to be extra time in between the two sets of bangs because according to Oscar’s statement, he did quite a few things in between when the shots took place and when he knocked in the door panel with the cricket bat. Roux is trying to sell that the initial bangs that got Dr. Stipp out of bed were the gunshots and the second set of bangs was the cricket bat breaking down the door. Since Reeva can’t scream anymore after the gunshots, clearly the only logical solution for the screaming heard in between is Oscar screaming like a woman. They can’t be having a woman screaming at all because it destroys Oscar’s case.

So… in playing along with Roux, I have tried to interject Dr. Stipp’s account of events in to Oscar’s statement from his bail affidavit. This is what I come up with:

Oscar shoots through the toilet room door and Oscar starts wailing, so much so, and extremely high-pitched, that all of the neighbors think they hear a woman screaming (although, he never states that he does this in his affidavit). THIS IS WHEN STIPP WAKES UP AND GOES OUT ON HIS BALCONY AND SEES THE BATHROOM LIGHT ON, AND HEARS THE SCREAMS. That light was on immediately after the FIRST SET of bangs that Dr. Stipp heard. So that would have to mean that the light was either on during the gunfire or Oscar turned it on immediately after the gunfire (if we are to believe that the first bangs heard were shots). Remember, at this point Oscar supposedly didn’t know that it was Reeva in the toilet room. In light of that, why is he wailing like a woman? This is why Roux needs to know when exactly Stipp heard the screams because it makes no sense that Oscar is screaming within seconds of the gunshot. But according to Stipp, that is what he heard.

This is what Oscar said in his affidavit:

After he fired the shots, he yelled to Reva to call the police and she did not respond. He moved away from the bathroom, keeping his eyes on the entrance and everything was still pitch black in the bedroom. (The bedroom and the bathroom are not that far apart that light in the bathroom wouldn’t provide some illumination down the hallway.)

He specifically states “I was still too scared to switch on a light”. Those are his words. Again, I have to remind you that at this point Stipp is seeing the light on and hearing intense high pitched screaming, yet Oscar still doesn’t know that it is Reeva who is shot in the toilet room.

When he comes in from the balcony, he puts his legs on, goes to the bathroom to try to kick the door in and in his own words – “I think I must then have turned on the lights”

He can’t kick the door in with his prosthetic legs so he goes back to the bedroom to get the cricket bat and returns to bash the door panel in.

(Side note: would somebody really use a prosthetic leg to try to kick a door in? It doesn’t seem to me like that would be the most stable thing to do. But perhaps in the heat of the moment, somebody would. Just something else to think about.)

So, even if we go with the defense story and try to weave in Dr. Stipp’s account, it still doesn’t work. They don’t fit.

If we are to believe the witness Dr. Stipp and believe that the bathroom light was indeed on that whole time, that also creates a serious problem for Oscar’s claim that he saw the bathroom window open and felt a rush of terror. Does it seem likely to you that somebody who breaks in to your home in the middle of the night via your bathroom window is going to turn the light on? Oscar being “terrorized” by this is simply illogical.

One discrepancy that was found amongst witness Dr. Stipp and witnesses Mrs. Burger and Mr. Johnson is that Burger and Johnson heard blood-curdling screaming immediately before and during the bangs that occurred at 3:17am. The screams trailed off with the last bang according to them. Dr. Stipp did not hear screaming immediately before and during the shots at 3:17am (these would be the second set of shots he heard), although he did point out that he was inside dialing security on the phone trying to get somebody to help when he heard that 2nd volley of shots. It’s possible because he was inside focusing on getting a hold of somebody that he did not hear the additional screams that were taking place as those 3:17am shots were going off.

Now, they are back to discussing Dr. Stipp’s vantage point. They review photos so Roux can understand what he saw. Dr. Stipp explains that he could see the top half of the middle and right window and all of the left window. Parts of the windows to the right are obstructed by trees, that is why he only saw half of those. The bathroom windows consist of 3 sections and according to Oscar, it was the section on the left that was open (if you are looking at the windows from the outside). Here is a photo of the windows from the inside – so it would be the window section closest to the toilet door on the right that Oscar states was open. 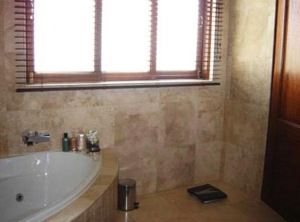 Roux wants to know how Dr. Stipp saw a figure moving in the window since the windows are frosted. He assumes it’s because the window on the left is open and he can see the figure through that open space. Surprisingly, Dr. Stipp states that he doesn’t recall that window being open. This would be another huge problem for Oscar. The window being open is one of the things that supposedly freaked him out so much that he went in to full blown terror mode thinking there was an intruder in there. But Dr. Stipp states that he can’t definitely say if it was open or closed, just that he doesn’t recall that it looked open. Roux states they have pictures from the scene and puts the kibosh to that conversation quickly.

He also addresses the sound tests that they conducted on February 21st this year. He wants to know what Dr. Stipp heard. Dr.Stipp heard loud voices that sounded like they were arguing. But he did not hear screaming. The voices sounded male. He couldn’t make out specifically if one was male and one was female. According to Roux, it was a male and female conducting the test and they were screaming. Dr. Stipp was finally excused.

Next up is Samantha Taylor, Oscar’s ex-girlfriend, and Pieter Baba, a security leader from Silverwood Estates. I will write about their testimony tomorrow. 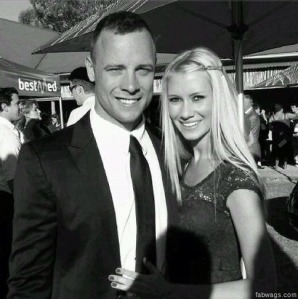