Here it is – the full video of Oscar’s reenactment for his Defense team as shown on the Australian TV show, Sunday Night.

This program is lacking many details that are relevant to the full account of the events. It also has some inaccurate information and is heavily biased in favor of Oscar’s innocence.

Perhaps most shocking to me is his flat affect throughout the reenactment. In court, he has been sobbing, throwing up, and has been seemingly inconsolable at times. But in this video, he speaks very calmly and bluntly about what happened that night. He appears to be emotionless. The complete opposite of what we have seen in court. He has been medicated since last year, including in court, so that can’t be used as an excuse. It just appears to me like he’s two different people in private and in public.

Oscar’s reenactment of yelling “call the police – get out of the fucking house” in the beginning of the video definitely sounds like a man to me! Nobody would confuse that for a woman’s voice or a woman’s terrified screams.

The “please god” and “helps” that he yells a little later in the video do sound more high-pitched but they still don’t sound like a woman’s blood-curdling screams, in my opinion. More importantly, his account of what he screamed, how he screamed it and when he screamed it still doesn’t match what the witnesses heard. It was only after the State’s ear witnesses testified that Oscar started adding in to his story that he screamed loudly immediately after shooting his gun. He also added in that he was screaming in his bedroom while searching for Reeva. That was some of his finest tailoring in court.

Another huge problem I have with this program is that Oscar says he heard the noise of the magazine rack moving and fired 4 shots. There are multiple issues with this statement.

On the stand, he claimed that he didn’t mean to fire any shots. He acknowledged having his finger on the trigger and pointing in the general vicinity of the door, but refused to admit that he meant to pull the trigger or that he aimed the gun. He considered those particular actions to be an “accident” due to being startled. He claims he never meant to shoot anybody. But in this video, he states matter of factly “I fired four shots”. No waivering, no lame explanations, no “I didn’t have time to think” rehearsed lines… just, “I fired four shots”.

Also, the sound of the magazine rack moving (“wood moving” as Oscar called it in court) was not mentioned in direct examination. It was only mentioned in cross-examination as an after-thought when Nel pressed him about what “wood moving” sounds like. He originally testified that he thought the “wood moving” was the door opening because of the particular sound that his toilet door makes, but in hind sight he said he realizes it was probably the magazine rack that he heard.

This is impossible. The magazine rack didn’t move until Reeva fell on it, after she was shot in the hip. So that noise can’t be what prompted him to shoot. It was proven by ballistics that Reeva was standing up near the door when the first shot hit her in the hip. After that shot, she fell backwards on to the magazine rack that was against the wall on the other side of the toilet. Witnesses described hearing a pause after that shot, which again is supported by the ballistics. Oscar repositioned his aim and shot 3 more times hitting her in the arm, hand and head. One bullet missed.

His claim that a sudden sound caused him to shoot rapidly 4 times, without conscious thought, is not supported by the physical evidence, primarily the injuries that Reeva sustained, and what the ear witnesses heard.

One item that the narrator got incorrect was how Oscar and Reeva’s relationship began. He states that initially they first kept their relationship quiet, but at the red carpet sporting event on November 4, 2012, they went public for the first time. This is not accurate. They had just met that same day through a mutual friend, Justin Devaris. They hung out during the day and on a whim, Oscar asked her to go with him to the event that night. They had not been secretly dating prior to this.

Another problem I have with the animated reenactment is that it shows the duvet on the bed. Oscar got himself in trouble on the stand when he tried to insist that the duvet was on the bed and the police moved it. Nel was able to prove that the duvet was found on the floor due to the blood spatter pattern on top of it. That blood spatter was caused by Oscar carrying Reeva out of the bathroom after the shooting.

Also in that animation, when Oscar is getting off of the bed (after looking for Reeva), it shows his figure getting off at the front of the bed. On the stand, he said he got off on the right side of the bed closest to the balcony (where the cords, iPads, shaver, etc. were all on the floor), he felt around the curtains to see if Reeva was hiding there (then quickly changed that to he was balancing himself with the curtains), he then finally screamed for the lord to help him repeatedly, then went back to the bathroom. None of this was depicted in the animation, which means that Oscar never relayed it to the animator because it never happened. He was making it up on the stand.

The animation also shows Oscar walking toward the balcony (after he realizes the toilet door is locked) and the fans can be seen off to the right. On the stand, Oscar testified that when he brought the fans in, they were still on and he moved them to the front right corner of the bed. We know this couldn’t be possible because that is where the duvet was found on the ground We also know that the fans were not on, and the small fan wasn’t even plugged in. The large fan was found directly in the middle of the balcony doorway. Oscar would not have been able to run out on to the patio with the fan in that position.

The last issue I’d like to address is the sound test of wood banging on wood, versus the gun shooting the door. Dixon’s evidence about this in court was a joke and in my opinion, so is this comparison. The sounds are completely different. Scott Roder from the Evidence Room claims that due to the distance of the witnesses, they could have mistaken the bat noises for gunshots. He mentions that some witnesses were 300 and 500 meters away, which is not true. The furthest witnesses were the Standers and they were 212 meters away. Everybody else was between 70-170 meters away.

I took a bunch of screen grabs to illustrate some of these points above, and so you can see the reconstructed bedroom and bathroom (which was built exactly to scale). It’s shocking how small those areas look with people standing in them. Some other pictures that I grabbed are just more crime scene photos of interest and photos of Oscar throughout the reenactment. Sadly, we see another picture of the deceased Reeva, this time a full body shot at the bottom of the stairs where she was found when the police arrived. 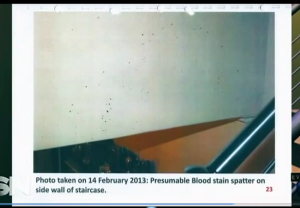 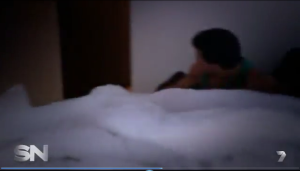 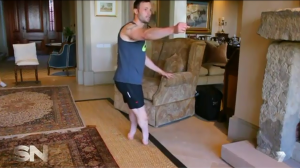 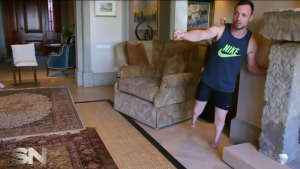 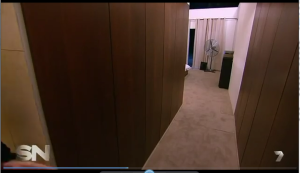 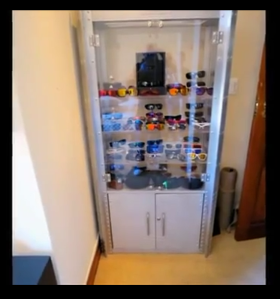