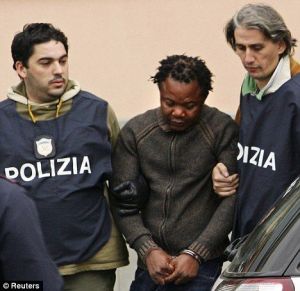 The most glaring memory-on/memory-off ruse is the one she concocted about hearing Meredith scream; then she goes blank and wakes up in her boyfriend’s bed.

Think about it.  One minute she’s at the villa and Meredith is being killed [not by her, by someone else], the next she wakes up in her boyfriend of barely-a-week’s bed.  We’re not told anything more.  Did Patrick hug and kiss afterward, or go out for drinks, did they high-five each other, did Amanda wash dishes at the villa whilst in the kitchen, did Patrick take a shit, did Amanda walk home or did Raffaele come and fetch her in his car?

Amanda waking up late in Raffaele’s bed is also suspicious.  In Raffaele’s memoir he writes that Amanda typically got up early, at 05:00.  Getting up early as a habit would explain why Amanda was standing outside Marco Quintavalle’s shop before it opened on Friday November 2nd, otherwise it wouldn’t make sense.  But if Amanda typically woke up early, and if they were going to Gubbio, why did both of them sleep till 10:00?  After having a quiet night watching a movie and talking, and not doing much else [they can’t even remember making love] why didn’t Amanda get up early, as she usually did?

Now remember, Amanda was actually two-timing her American boyfriend David Johnsrud [DJ] with Raffaele, and flirting and sleeping with different guys, yet in her memoir and in Raffaele’s there’s this mischievous ruse of ‘the days melting into one another’ and each day being a repeat of the last, some or other combination of ‘reading Harry Potter, making dinner, making love etc.’. Which is why…..

UNDER SUSPICION is available on Amazon

If you don’t have a Kindle, no problem.  Download the free Kindle Reading App and read from any of your smart devices or your PC.