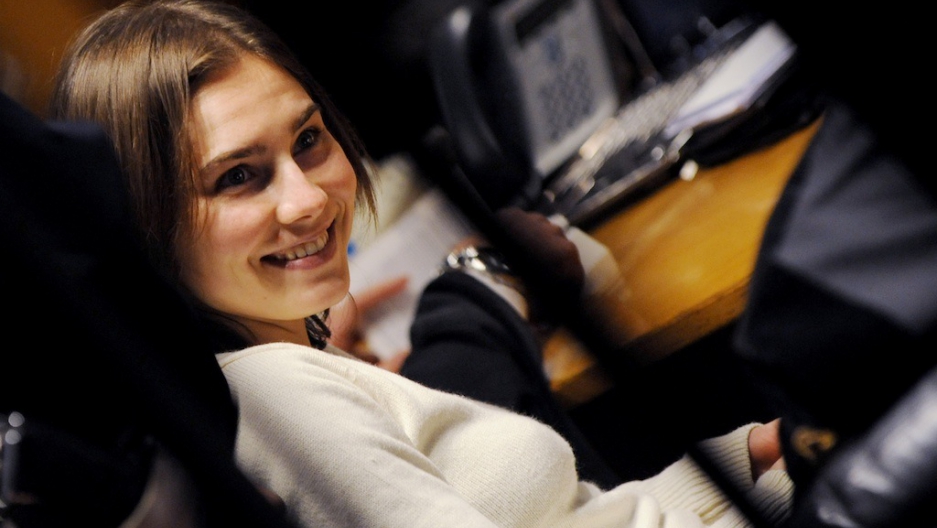 Excerpts from the chapter

The Case Against Amanda Knox

The charming, ramshackle cottage, like something out of a Hansel and Grettel fairy tale that lured the young British student into staying there was tucked away from the ribbon of roadside skirting the hillside, so much so that police looking for the house couldn’t find it, and needed directions.

While possessing a sort of old world charm, the crumbling villa had a dilapidated exterior and was obscured by foliage and trees on several sides.  It was peculiar for a house in central Perugia in that it was relatively isolated, in that few other dwellings immediately surrounded it, and at night, the grounds – if not lit – could be quite dark. The tenants at this property, without exception, smoked marijuana on a regular basis.  Sunken below the level of the road, out of sight, it was a place to unwind, strum a guitar and get high on one’s own particular brand of bohemian bliss.

It was a place to disconnect, and be disconnected without getting into any trouble.  It was also a place where Meredith would be murdered, and apparently no one would know.

And this is the key reason why Meredith Kercher’s murder is not an open and shut case.  The mystery is wound around a nebulous clock that refuses to give up its secrets. We cannot be certain of the time of death.  We’re not talking about minutes either, but hours.

Unfortunately for the suspects in this case, they made such a mess of the crime scene, it appears they spent several hours cleaning up, hence they are unaccounted for during the several critical hours when Meredith’s light went out.  When her precious blood spilled all over her bedroom floor – warm and slick – parts of her seeped into everything that came into contact with it.  Shoe soles, barefeet, hands, knives, shirts, coats, the wall, the bed, the closet – and Meredith’s own underwear. If there was ever a crime where the criminals left with blood on their hands, this was it.  If Meredith’s death was a cruel and drawn out struggle for the young woman, if it was an agonising death – and it was – then her murderers paid a price for that brutality.  They left a blood trail effectively signing their names in blood.

Because Meredith’s murderer was such as amateur, Meredith didn’t die because of a mortal blow. She died due to blood loss and asphyxiation.  Bleeding to death took her an agonising 600-900 seconds. That’s an eternity to die.  The reader ought to count on his or her watch, ten seconds, right now.  Or thirty seconds.  Or fifty seconds.  Consider that in all this time, Meredith, a strong, spirited girl, merely lay calmly whilst bleeding to death.  10-15 minutes is a long time not to scream or struggle. 10-15 minutes, when you are attacked with a knife in your bedroom, is a long time not to fight back.  Not to get any skin, or dirt, or blood under your fingernails.  If Guede didn’t stab Meredith in the neck, who did?  If Guede held Kercher down, if he digitally raped her, who was he doing it with, and why? Anyone who cares about this case should not only be deeply outraged, but committed, to solving this mystery surrounding Meredith’s untimely departure from this Earth.

AK vs RS (implicating each other) Immediately after having been told her boyfriend was no longer supporting her alibi, Amanda implicated Patrick Lumumba. In Amanda’s schema, she also smears Raffaele a little, saying he had blood on his hands whilst cooking, maybe from fish, but maybe not. Sollecito in turn supports Amanda’s story until the heat in the kitchen gets too much for him, and he then throws Amanda under the bus, but then loses an alibi himself (that she was with him).

Implicating Lumumba:  Lumumba had nothing to do with the crime, so why implicate him?  Why not implicate Guede?  Well, there is such a thing as honour among thieves – and murders.  You rain on my parade, and I’ll rain on yours. 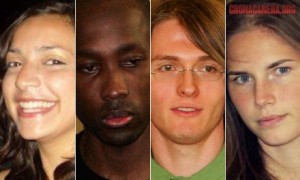 Drugs:  From Amanda’s prison diary (which we will analyse in detail in DARK MATTER) Amanda herself speaks of dream-like feelings of disconnectedness, unreality.  In her statements to police Amanda specifically states that she can’t be sure what is real.  She literally uses the word ‘dream’ to describe how she saw herself and heard Patrick [written ‘Patrik’] assaulting Meredith.  One aspect that makes absolutely no sense on her version of Patrick assaulting Meredith is that Patrick didn’t care that Amanda was there.  He went into her room, and by all accounts raped and murdered Meredith, not caring that his employee was next door, and also apparently leaving, still not caring that a murder witness was out there.  In her desperate rush to implicate Patrick, Amanda seems to have forgotten about the implications of her own story.  Of course, by implicating Patrick, by being a witness, and at the same time, Raffaele no longer backing up Amanda’s story, all three automatically became prime suspects. And it did seem like a crime perpetrated by multiple attackers.

Nick van der Leek has written a stunning exposition of the actions of Amanda Knox, in particular. It is clear the author has researched his material in great depth, from court documents, newspaper reports, court testimony, DNA evidence and motive. However, none of this gets in the way of the flowing narrative.

The book reads like a psychological thriller, with the perpetrators continuously trying to keep six steps ahead of the cops, like a Spaski- Fisher chess game.

It doesn’t help that in Italy, court hearings go on for years and do not end until the final Supreme Court seal of approval. In this case, we know the Italian SC – perplexingly to many – acquitted the two remaining accused, Amanda Knox and Raffaele Sollecito.

However, that does not mean we cannot revisit the crime scene and try to reconstruct, from all the facts known, what really happened and to attempt to guess at the motive.

You may or may not agree with Nick van der Leek all of the time, and critical minds should not, as the case is ever-developing; however, the author’s insights into what drives Amanda Knox, in particular, are astute, perspicacious and logical.

I have my own theory as to what happened, but it doesn’t really contradict Van der Leek’s view point. This is a marvellous book; well-written, exciting and insightful. Just when you thought you knew all there is to know, the author surprises with a fresh nugget of information or observed behavior.

DECEIT is available now on Amazon