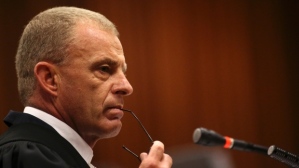 How did the State do?

For several months now, we have all pored over the evidence in this case and searched for answers to many nagging questions. Many of those questions still remain unanswered and were not addressed in the State’s closing arguments… much to the disappointment of some people expressing their opinions online, and likely to the delight of the Defense.

Does that mean the State has not proven their case? No, absolutely not.

I don’t want to get bogged down in dissecting every aspect of the evidence from trial, as I’ve already done that throughout the blog. I’d rather point out from a legal perspective why I believe that Gerrie Nel conducted a pretty brilliant case. Of course, the verdict will ultimately determine that, but here is my assessment as to why I believe they have succeeded…

Cases fail when the State does too much or does not have a narrow focus on what they are trying to achieve. The goal is not to spew out endless amounts of information in the hopes that more is better. It’s better to know what exactly you have to go after to prove that the accused/defendant is guilty per the letter of the law.

Nel set out on a very specific mission back in March to prove to the court that Oscar’s story could not be reasonably, possibly true. We heard that sentence numerous times. He was direct in stating that this was a circumstantial case. It’s circumstantial because only two people were in the house that night and only one of them can tell a story.

Circumstantial evidence requires an inference. It is an accumulation of details that reinforce each other and corroborate that inference. For instance… a woman is heard screaming in terror, several minutes later there is gunfire and a woman is subsequently found dead. You can circumstantially make the inference that the screams came from the woman who was killed and not from somebody else.

There is also direct evidence, which does not rely on inference (ballistics, blood spatter, etc) that can be added to the story to further strengthen it. The ballistics evidence from Mangena greatly supports that Reeva had time to scream. It also supports that there was a pause after the first shot, which equals conscious thought. That bolsters the circumstantial evidence of what the neighbors heard and also shatters the Defense assertion that Oscar acted out of an involuntary response.

Nel reaffirmed that this case is not about the pieces – it’s about the totality of the evidence and what you get when you put it all together. The mosaic. “It is necessary to step back a pace and consider the mosaic as a whole. If that is not done, one may fail to see the wood for the trees.”

I really started to fully grasp what he was trying to achieve when he concluded Oscar’s cross-examination on April 15th with the following:

Nel puts to Oscar that there were only two people in the house that night. He killed Reeva and is the only one who can give us a version of what happened. Oscar agrees.

Nel also puts to him that “his version is not only untruthful; it is so improbable that it cannot be reasonably, possibly true.” Oscar does not agree.

Nel continues, “the court WILL, on the objective facts and the circumstantial evidence, make the following findings”:

1) Reeva ate within 2 hours of being shot and killed.

(Oscar himself, via testimony, cannot confirm or deny that Reeva ate within 2 hours of her death, therefore the Medical Examiner’s evidence will be more credible than his even if it is subjective)

2) Whilst awake, there was an argument in which Mrs. van der Merwe heard Reeva’s voice.

(First, this bolsters the eating later in the night – if Reeva was eating, then she was awake. Second, if there was a fight starting around 1:56, and an arguing female voice was heard, and subsequently one hour later a woman is shot dead, then one can strongly infer that voice was from the victim. If the Judge finds Mrs. VDM to be credible, she will infer that voice was Reeva’s)

(Oscar cannot and did not prove in court that he screams like a woman. That will forever remain only an assertion. If the Judge finds Johnson, Burger and the Stipps to be credible, then the Judge will accept that Reeva did scream.)

4) Oscar shot 4 shots through the door while knowing that she was behind the door.

(Using the logic from above, the Judge, accepting that the voice and screams were Reeva’s, will then accept that Oscar knew it was her when he shot her through the door)

5) Oscar knew that she was talking to him.

(Reeva was inside of the toilet room, standing up, fully clothed and facing the door. We know this from the hip shot. The neighbors heard screaming from a woman and voices inter-mingled. Based on this, again, if the Judge has already found those witnesses credible, she will infer that Oscar and Reeva were communicating through that door.)

6) She was locked in the toilet room.

7) Oscar armed himself with the sole purpose of shooting and killing her.

(In logical procession, with the Judge accepting the ear witnesses as credible – a woman is awake, arguing and screaming, voices-intermingled, there is communication going on from behind a closed door, Oscar retrieves his loaded gun, shoots Reeva 4 times through that door – there is no other way for the Judge to see this but an intentional killing)

After this day in court concluded, I had read some debates online about Nel’s use of the words “The court WILL find…” Some people seemed to think that it was a pretty arrogant thing to say considering the Defense had not yet given their full presentation; there were several more witnesses to call. Nel’s intention here was not to be arrogant. He was pointing out his laser-focus on this case, which he remained true to throughout:

IN THE ABSENCE OF A SUBSTANTIATED, TRUTHFUL STORY FROM OSCAR, THE COURT WILL THEN HAVE TO RELY ON THE OBJECTIVE FACTS AND THE CIRCUMSTANTIAL EVIDENCE. This is the most important sentence to understand in this case.

Point 218 from the Conclusion in Heads of Argument:

If the court rejects the accused’s version of events and relies on the objective (common cause) facts and the circumstantial evidence a conviction on murder with dolus directus is inevitable.

In the matter State versus Montsho (Case No: CC31/13), Judge Thulare defined premeditated as “to think out or plan beforehand”. The Judge went on to explain that this concept “suggests a deliberate weighing-up of the proposed criminal conduct as opposed to the commission of the crime on the spur of the moment or in unexpected circumstances”

At page 9 of the judgment the court deals with the concepts of planned or premeditated murder and found: “ … the period of time between the accused forming the intent to commit murder and carrying out this intention is obviously of cardinal importance but, equally, does not provide a ready-made answer to the question of whether the murder was planned or premeditated …”

The common cause facts include:

• The accused thinking of and remembering where he concealed his firearm
• The accused moving towards the place of concealment, uncovering and then extricating the firearm
• Un-holstering the firearm
• Getting the firearm ready to fire, by at least disengaging the safety mechanism
• Walking/running more than 5 metres with the firearm at the ready
• Taking up a position
• Firing four shots into the toilet cubicle
• Maintaining a good grouping while firing

We respectfully argue that the actions of the accused demonstrate pre-planning in that he armed himself, moved towards the toilet and killed the person in the toilet.

I believe strongly that Murder was proven and that dolus directus will be the finding. I believe that Judge Masipa will find the ear witnesses to be credible, therefore she will infer the screaming female voice was Reeva’s. The only inference left is that Oscar’s story is not reasonably, possibly true.

The Judge will render her decision on September 11.